Delaware has been ranked as 48th in public Integrity, accordingly, WE advocate revision of  the  Delaware Public Integrity Code  to preclude conflicts of interest and other forms of corruption in order to restore our government to a higher standard.

WE strongly support term limits for all public offices.

As Delaware’s primaries  are now  publicly funded, equal access to the primary election process should be granted to all parties and unaffiliated voters to ensure open and equitable candidate selection as a basic matter of equal protection under the law. All reapportionment should be accomplished through independent redistricting commissions.

Citizens rightfully deserve an effective voice in their government at all levels.  Corporate special interest groups have undue and inordinate influence and direction over  legislation,public policy and administration through an elaborate system of  lobbying,  gifts  and other  considerations. These activities corrupt the political process and must be curtailed forthwith.

All Delawareans should have the opportunity to elect their county administrators, county attorneys, finance directors  and  planning and zoning commissions.  WE strongly advocate greater transparency, accountability, streamlining and optimization of county operations and full restoration of the constitutional role of the Sheriff as elected Conservator of the Peace.

ELECTION of the JUDICIARY

WE advocate general election of the state judiciary in order to restore the proper balance of power between branches of government and the People and reform the court system.

Delaware’s Family Court system must be reconstructed to make it open, impartial and fair in full accordance with the Delaware Constitution. The rights of children, parents and families must  be  fully protected. Current  institutional deficiencies, abuses and inequities  must  be eliminated.  WE advocate increased penalties for pedophiles and major sex offenders.

A Paradigm Shift in the PUBLIC INTEREST

The Independent Party of Delaware is dedicated to reform of government at all levels in the Greater Public Interest through election of independent candidates.

Too much power hasflowed into the hands of too few  at the expense of our Freedom, Prosperity and Security. Larger and more intrusive government, operating behind closed doors, controlled by special interests, cannot be better government. Accordingly, the IPoD strongly advocates reforms to restore the balance of power in favor of the People, as the framers of the Constitution intended.

​
Modern Delaware government must, at all levels, be restructured away from special interests towards the greater common interest. We hereby propose and advocate state constitutional amendments establishing:

Initiative      –   The right of citizens to draft and propose legislation;

​    Referendum –  The right of citizens to ultimately vote on legislation and constitutional amendments; and

Recall          --   The right of citizens to dismiss elected officials for just cause.

We fully support enactment of a state constitutional amendment precluding misuses and abuses of the power of eminent domain by limiting public acquisition of private property solely to matters of public use, convenience and necessity. Furthermore, reasonable private land-use should be protected from undue arbitrary, capricious restriction, encumbrance,  interference.and complication.

The People deserve an effective public advocate charged with defense of public integrity in the face of public corruption, waste, fraud, mismanagement and abuse of power. WE offer legislation to create an independent elected State Office of Inspector General, having  wide investigative, subpoena and prosecutorial powers over state and local government corruption.​

​ENVIRONMENT and QUALITY of LIFE

reorganize its agencies to better protect the public and natural ecosystems.   It is an outrageous fact  that  90% of Delaware’s  natural waters  are  on theUSEPA’s 303(d) List of Impaired Waters, failing to meet their designated uses for drinking,fishing and swimming. Our public drinking water supply and health have been dangerously compromised

by poor public policy. We must protect  our environment and public health  effectively and fairly,  as  pollution is a wasted resource and a sign of poor management. The distorted “ left vs. right “ political mindset of “Environment vs. Economy” is dangerously outmoded thinking that we can no longer afford to perpetuate.

Delaware must preserve its ability to produce food, natural products and forest products if  our economy  is  to remain strong  over the long term.  In a global environment of rapidly increasing population,  economic power will belong  in large measure to  food and energy producers.  Policies  must be reorganized  and redirected  to actively alter  the economics of farming  in favor of  Delaware’s farmers  through  a modern integrated program  of  crop
diversification,  research,  technology assessment,  innovation,  product development  and attraction  of  related  food processing,  support industries  and  agro-industrial complexes. History has repeatedly shown  that  the  bleak alternative  is  a  thoroughly overdeveloped suburban landscape  with a  low-paying service sector economy, higher taxes and a lower quality-of-life when farming vanishes.

America’s veterans deserve much better treatment than they are now getting. The State of Delaware should act as their advocate in claiming their rightful federal benefits.

The mismanagement of Delaware’s correctional system is a crime against all Delawareans. Political grandstanding must stop and practical commonsense restored to prison administration before systemic safety and security problems can be solved. Effective action to correct existing institutional deficiencies must be taken by the Governor and the General Assembly as a matter of public safety.  Alternative sentencing for nonviolent crimes is a valid alternative to expensive prison overcrowding. Independence of the parole and pardoning process must be preserved.

Request a FREE e-copy of the IPoD Platform.

Delaware’s education system must be thoroughly reorganized and redirected to enable all students to learn at their own rate and reach their maximum natural human potential  by accurately evaluating individual learning styles. Critical educational policy decisions should be made at the local community level. Overgrown educational bureaucracy must be streamlined and held more accountable to the People. Best available knowledge and methods must be implemented, intellectual standards raised and creativity encouraged. WE strongly support development  of a low-cost Internet-based university system for all Delawareans and oppose Common Core.

Delaware needs to more proactively investigate clean, sustainable and renewable energy sources by fostering a free market based culture of invention and innovation, including but not limited to: solar, wind, biomass, hydrogen, high-temperature superconductors and tidal sources.Our current energy policy needs thorough scientific and economic review, restructured towards increased domestic energy production with proper environmental safeguards for the benefit of all Delawareans. WE support rational encouragement of alternative energy sector development, conservation, self-generation and energy-efficient design in a more practical, constitutional and cost-effective policy framework  without undue hardship to individuals and businesses

energy, an effective educational system, fair taxation, business incubators; and elimination of arbitrary and unnecessary regulation. As complex problems require long-term multi-dimensional thinking, WE favor an integrated approach to the problem based upon real analysis, innovation and creativity.  Local  small and medium  business development should not  be neglected  in  favor of  large multi-national corporations. Programs  and  incentives should  be  rationally  based.  “ Pet projects ”,  based  upon  political  favoritism, should  be eliminated.   Where government can have  a  positive catalytic effect  towards effective andsustainable economic development  in the greater public interest, it should do so; otherwise, it should get out of the way.

Small and medium businesses and wage earners deserve the same tax breaks  that the banks and large corporations now enjoy. The tax structure should be reformed and simplified to promote  savings, investment and expansion.  Government must thoroughly evaluate  its operations  to eliminate waste, fraud, incompetence and inefficiency before contemplating any tax increase.

Paid for by the  INDEPENDENT PARTY of DELAWARE.

for the 21st Century 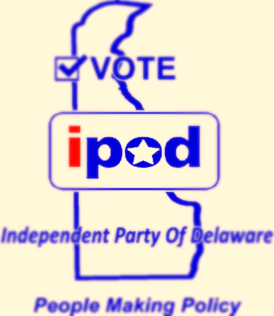